What Is Your Rank?

Richard Ihle
What Is Your Rank?

“What is your rank?”

Of all the ideas I have ever had--whether eventually jettisoned, promulgated for the purpose of semi-Self-aggrandizement, or hoarded like a Rosicrucian before there were web sites with PayPal donations--few notions seem as intuitionally (therefore “Theosophically”) true to me as the existence of a hidden Psycho-Spiritual Hierarchy.

Moderator Conferences on Peace Diet, Yoga and a transcript of a talk on Animal Rights Movement

Here is some info I received from Dr. Tuttle, a theosophist.

Here is an interesting report on CNN about Olcott Memorial School at Adyar. Enjoy the video.

ANCIENT SAGES taught that this physical world is interpenetrated by a series of increasingly ethereal worlds or fields, composed of energy-substances beyond our range of perception.

The fields closest to us are referred to as the “astral light.” It is already confirmed by science that the fundamental building block of matter is energy. And all physical life, from crystals to the atoms and cells of our body emit this energy in the form of photons—waves and particles of… Continue

One of the members here, Manjeri Krishna, an actor, is in the new movie Bandslam to be released soon. It is a hip hop movie and Krishna appears as a DJ. He is a 4th generation theosophist.

"There is No Religion Higher than Truth."

Is there any truth in religion at all to be higher than? Are religion and truth mutually exclusive qualities? Is religion a senseless bondage to myth and tradition, none of it of any value other than to the priests and preachers who profit from human ignorance and fear?

And what is truth in the first place? How would we know it if we fell over it and would it matter if we… Continue

Pink Angel and I had a brilliant performance at Galapagos Art Space last night and fell in love with the venue. Look for us to do more performances in this "green" space. We never touched the stage--always seeking maximum interaction with the audience. The audience also got a massage because they were sitting on our drum.

Theosophical Order of Service has a nice website at:

[Interview can also be found at this link on Enrichment.com: http://enrichment.com/content/enrichmentcom-interviews-dr-amit-goswami-author-creative-evolution]

Dr. Amit Goswami is the author of the new book, "Creative Evolution: A Physicist's Resolution between Darwinism and Intelligent Design" [Quest Books]. Dr. Goswami is a pioneer in using quantum physics to articulate the paradigm shift from a… Continue

The TS Estate at Adyar is under threat of a noisy motorway construction. Our help is needed. The President of the TOS in Chennai Region, Mr Maithreya, explains the situation below. Did you receive his message already? Apparently expressions of concern from around the… Continue

Dr C.V. Agarwal
.
Dr Agarwal, the Presidential Representative
for Southeast Asia has recently passed to
higher service.
.
A retired professor of Technology at Benaras
Hindu University in Varanasi, Dr C.V. Agarwal
was a member of the Society from his
college days. He served as the General
Secretary of the Indian Section for very
many years. After his long stint at the Indian
Headquarters at Varanasi, he moved to
Adyar 15 years ago… Continue

I am rather new to Theosophy,but I understand and believe in its basic tenets.I am hopeing to expand myself and learn more about this group of seekers.

a Yoga of Light by Geoffrey Hodson

A YOGA OF LIGHT BY GEOFREY HODSON -Adyar 1969

At the heart of the Cosmos there is ONE.
That ONE has its sanctuary and shrine in te heart of every human being.
Man's first major spiritual discovery in consciousness is of this Divine presence within him, "The Inner Ruler Immortal seated in the hearts of all beings".( the… Continue

“…the real trouble with the… Continue

Evaluating "The Secret": cosmic candy store or is it for real?

Mike Schwager, Founder and Editor-in-Chief of Enrichment.com, had the pleasure to recently interview television talk show host and author Dennis Wholey. Here is that conversation:

MS: Dennis – welcome to Enrichment.com. First, I want to say “thank you” for everything you’ve done to enrich people’s lives. First, for your terrific talk show,… Continue

The Significance and the Legend of the Chintamani Stone

There is a special story about a piece of stone from the Star Sirius. (I was reading upon the Agni Yoga discussion forum). A meteorite stone supposedly, given to Nicholas Roerich, in circumstances hard to verify.

While the Chintamani Stone as other supernatural stones and objects, the search often relates to the physical item and the very possession of such item is the alleged key to its magic, in reality the physical item is seldom as important as its corresponding, “doppelganger”… Continue 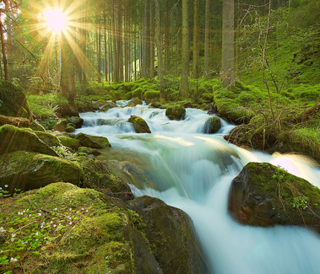 Ever drifting down the stream–
Lingering in the golden gleam–
Life, what is it but a dream?

WHEN our rational brains are all heated up, arguing life’s complexities, that’s usually the best time to kick off our shoes and give it a rest.

When faced with a critical decision, or stuck on a complex problem,… Continue