Nice videos on the topic and should interest anyone interested in the historical aspects of TS.

I happened to see the last part of the video which dealt with Sri Ram, John Coats and Radha Burnier and has some very interesting material since Joy Mills had known all of them and was the Vice President during the term of Sri… Continue

How do we make materials available to all souls, rich and poor, who may be able to use them and transform themselves and thus the world?

On the one hand, we have seen spiritual publications, nicely printed and bound to last for centuries and more, but literally costing an arm and a leg so that the poor theosophist in the developing world cannot afford them.

There was no solution to this dilemma 10 - 20 years ago. But today we have one which is inexpensive and efficient -… Continue

Do you recognize me? Am I familar? Being authentic self (Katt is my nickname, and many of my friends know me by that name so many of my older images are tagged with it)

For me I believe integral to the process of enlightenment is being authentic self. What does this mean? I don't have all those answers, I'm still working on it. I do…

See video. Leslie, a theologian, deconstructs Christianity and brings the value of love, one's unique perspective, manifesting Christ through one's person, meditation, feminine perspective of the holy Trinity, and much more back to the Christian religion. The times they  are a changing.. This Saturday we will have one of the largest full moons in well, many moons... a couple of decades. I don't know about you, but I'm hoping for clear skies to catch a glimpse of that big beauty.

I've been around for more than a couple of decades, and I…

Namazu ~ The Earthshaker
Making sense of disaster, history and myth.

According to ancient Japanese legends earthquakes are caused by a titanic catfish, Namazu.…
Continue

Let me tell you about Chief Bemidji Syndrome. . . .

Chief Bemidji is a seven-foot painted wooden statue overlooking Lake Bemidji in the city of Bemidji in northern Minnesota. 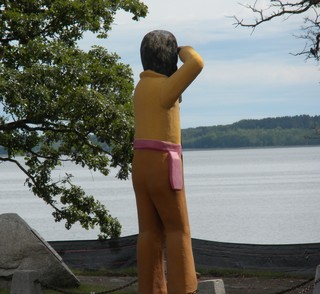 “Perfect morality may not really abhor vice; it is perhaps just perfectly bored by it.”—General Theosophy