Is the "Old Lady" Baaack? 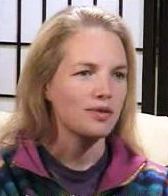 FREE spirited students of Theosophy may be interested in more information concerning the writings of the young archeologist and historian D. M. Murdock, aka Acharya Sanning.

She is especially interesting when compared to the avowed mission of H. P. Blavatsky, to expose dogmatism and materialism in science and religion, (and Theosophy!)

HPB referred to her controversial "Lucifer" magazine as the Theosophical Movement's "combative manas."

"The personal God of orthodox Theism perceives, thinks, and is affected by emotion," Blavatsky wrote in The Secret Doctrine (1:2fn) -- "he repents and feels 'fierce anger'":

"The conceptions of a Personal God as changeless and infinite are thus unpsychological and, what is worse, unphilosophical."

"The evolution of the God-idea proceeds apace with man’s own intellectual evolution," she wrote, and "the noblest ideal to which the religious Spirit of one age can soar, will appear but a gross caricature to the philosophic mind in a succeeding epoch! ...

"Outside of initiation, the ideals of contemporary religious thought must always have their wings clipped and remain unable to soar higher." 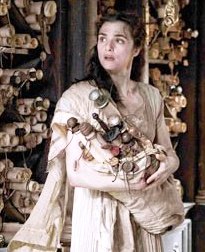 The fourth century was the turning point in the history of the Western world, the period in which Christianity took the form of a strong political organization.

Throttling the old religions, sciences and philosophies, “the Church” arose as a temporal power upon their remains.

At the same time, admiring crowds began gathering at the door of the academy where the learned and unfortunate Hypatia taught.

There is much more information about the outspoken Hypatia, H. P. Blavatsky on religion, and a video interview with Acharya, at the two-part blog Murder for God, on Theosophy Watch.
Murder for God, Part 1