A new book titled The Theosophical Society: The History of a Spiritual Movement has been published by Jeffrey D Lavoie. First 25 pages can be found here.

While I have not had a chance to access the full book, it appears that it is a well researched publication and hence anyone interested in the history of TS should read it.

Something that is to be noticed is the author’s acknowledgement of the value of the digital copies of the early issues of The Theosophist available on Theosophy Network (www.theosophy.net) and his personal appreciation of the help given by Joe Fulton, whose brain child the Network is. The author also has acknowledged the valuable suggestions given by many members of the Theosophy Network.

The above bodes well for the future of Theosophy Network. It is independent and is not financially or otherwise supported or controlled by  any organization and its success owes is due to the labors of committed volunteers world-wide. It is also one of the very few free open forums on Internet where matters relating to theosophy, brotherhood, spirituality can be discussed.  It just demonstrates what is possible in Internet era by a few dedicated volunteers. Many expect it to be a pioneer in the Internet era. And it needs support of everyone interested in the above topics.

If anyone is interested in reviewing this work please contact my publisher and they will likely send you a complimentary review copy. Please message me for contact info or go to www.brownwalker.com and tell them you would like a review copy. Thanks (and thank you Joe). 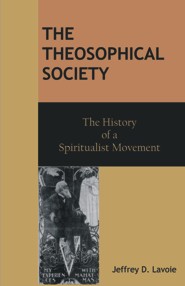 In spiritual and even in daily matters, Ingratitude is a serious crime and few realize how serious it is. The Inner Founders of TS, repeatedly told Sinnett and others to impress on them on this critical issue.

So I would be remiss if I do not mention about the heavy lifting done by David and Nancy Reigle in the scanning projects. They had painstakingly collected excellent photo copies of early issues of Theosophist and when scanning to digital files was mentioned, they enthusiastically followed through and scanned all the photo copies in a very short time. Marc Demarest and Joe provided the technical leadership and their time to convert the scanned files to form loadable to our server and make them downloadable. In addition technical help was provided by many and I am requesting Joe to post a followup listing everyone behind the project so that we do not miss the efforts of many volunteers here.

Jeff sent me a note commending this blog post and added that very many others have been helped by what we have made available here.

This particular instance convinces me that a small group of dedicated and committed volunteers can get things achieved most efficiently and effectively with very little funding. Whatever funding that is needed in the Internet era, was taken care of by the few volunteers. Keep tuned for more projects.

Keep going Joe. Greater glories are just round the corner.