The Trinity of Neurology

The concept of a Trinity playing a central role in the evolution of humans exists in eastern and western scriptures alike, though in different forms. While Judeo-Christian traditions describe it as the Father, Son and the Holy Spirit, Hindu traditions describe it as Brahma, Vishnu and Mahesh as well as three Gunas, Sattva, Rajas and Tamas. Numerous other interpretations exist to explain the concept of trinity. Is there scope for more?

What if the trinity described the evolution of human brain?

The evolution of the brain of humans is summarized as:

Modern human brains are composed of many structures, each of which performs a specific set of tasks.  However, all of these structures can be categorized into three parts, or evolutionary steps, of the brain.  The first part is known as the reptilian brain, which is the portion that we share with all the other vertebrates.  This part of the brain controls instincts and all of the tasks required to keep us alive, such as breathing and temperature regulation.  The second part of the brain is known as the mammalian brain, which, as the name suggests, is the portion of the brain that we share with all other mammals.  This part of the brain introduced three major structures, which are the hypothalamus, the hippocampus, and the amygdala.  The hypothalamus regulates fluid balance, internal body temperature, food intake, and sexual drive; the hippocampus is involved in forming new memories and creating mental maps of surrounding environment; and the amygdala is responsible for the feeling and expression of fear and anger.  The third part of the brain is known as the human brain, which is the most-recent addition and defines what it is to be human.  This part of the brain introduced what is known as the cortex, which is a coat of gray matter that covers the outer portions of the brain.  The cortex accounts for approximately 85% of brain mass and contains wrinkle-like folds all around to increase its surface area.  The cortex is split into four lobes, which are further divided into two hemispheres. The four lobes are known as the frontal, the parietal, the occipital, and the temporal lobe.

So, when one hears alchemists proclaiming one becoming two, two becoming three and out of the third comes one as the fourth (Axiom of Maria), or the eastern concepts of circle divided first into three and then into four, could they be describing the evolution of human brain?

Well, today I awoke in a dangerous mood... there is no definition of Trinity in the Bible, that may be the reason that early Christian theologians had so much trouble and heresies when trying to define it. The idea of Trinity does not belong to the Jew mainstream tradition, and I am not an expert in Kabbalah.

...and yes, this one, two, three... seems to be a very basic pattern, a fundamental one: subject, verb and complements make one sentence, which is the fourth... this kind of pattern seems to be everywhere, as its shown by the examples you provide, if it's so, it seems natural that this is also the pattern by which brain is organized   ;-)

True symbols have many, many meanings, this is different from scientific language in which the aim is one exact meaning for every term used.

I am glad to be at the receiving end when you are in dangerous mood. Thanks for making the correction that such pattern does not find mention in the Judeo-Christian tradition.

Hope this mood is only temporary.

Really interesting!   This is certainly similar to the way the 7 rays are described.  Three coming from the one, and four coming from the 3rd.   I don't see why it should not be possible for this pattern to be repeated in numerous ways throughout the life on our planet.  Makes sense to me.

I looked online to see what was out there about this and found this nifty table of different species.  The Gospel according to Wikipedia.  :-D

Unfortunately the scriptures do not go further than this. So the complete pattern is not available.

Deb - thanks for the neuron notes! However - the dendrites do the connecting...  curious.

I expected the whole body count in the Octopus to be higher.

I have also lived in somes areas within our country where certain numbers don't add up right (joke).

In this day and age - one has to use the full hermetic axiom to maintain a full deck.

hence the "as below so above" piece of the equation is very important.

Also, just goes to show how much I know about brain science.   Perhaps dogs' dendrites work better than cats', irrespective of numbers.  As much as I love cats (and I have 2 that think the universe was created for them), I do recognize certain holes in my relationship with them that really would be better filled by a dog.  For reasons unfathomable to me, they don't enjoy car rides or long walks.  ???

This is so totally true!  LOL

This is an interesting point being raised in your discussion.

The framework of The Gnostic Circle is based on the 3 (and its multiples).

The 9 being the transcendent divine, 6 - cosmic divine and 3 - individual divine/soul.

Obviously there is no separation between matter and spirit - that seed/soul in each of us contains wholeness. We are one... so it makes sense to view biological evolution within this context as well. If the three is the matrix/seed for understanding evolution on this planet earth, then it includes the evolution of the body as well as the spirit.

Very interesting.   There was someone I heard on a radio show a while back who was doing work related to "switching off" the amygdala.   He used that term as a metaphor really.   Wish I could remember who it was!  Essentially it was some kind of a meditative practice, but I seem to remember that it included some kind of physical component to do with the tongue in the mouth.  It's been several years ago, which is why I can't remember more details.  In essence, he had some kind of a technique that switched off the fear response at inappropriate times.  I think.  Don't quote me on that.

Have you heard of this, or this person?

Permalink Reply by Capt. Anand Kumar on February 23, 2012 at 9:43pm
I have a feeling that that the description in the scriptures of one becoming two, is actually a reference to the biological evolution of a single brain being divided into two hemispheres. This perhaps gave rise to the perception of separation or the origin of the feeling of I in humans.

Don't have any supporting evidence, but it makes sense.  I thought a lot about the notion of *I* yesterday.  Joe and I had a brief conversation about that, related to past lives, and time, and non-linearality (is that even a word?!  LOL).  We as humans have a such an ingrained bias toward the *I* that even when considering the notion of simulataneous lives, we tend to think in terms of multiple "MEs".  I mean it's hard to think about that in another way.  I was walking across campus yesterday and I caught myself looking at all the people walking &/or lounging in the grass (it was LOVELY here yesterday!), and I thought what if we're not all *I*s, that that is all an illusion, and we're all just one "something or other" having all these multiple experiences?   Anyway, I gave up.  It was too much.  I could feel brain cells exploding, so I focused on the trees and the sunshine and nice 72 degree temperature.  Delicious!

Hey Anand, My response to this question is found on my blog under the title 'one becomes two, two becomes three and out of the third comes one .... It includes a quote from Patrizia Norelli-Bachelet's The Magical Carousel Commentaries which discusses the axiom, and it includes a couple of diagrams which show how this axiom can be understood in its most basic application/layer of meaning in terms of Math & Geometry. I will include one of the diagrams here: 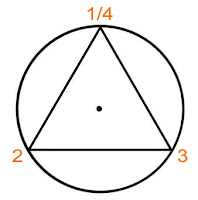