". . . At least following my Theosophical Society in America presentation that summer I had the opportunity to attend another participant's early-morning group activity. It was called 'Music Meditation.'. . ."

The above is a continuation of my theosophy.net blog contribution called “One Reason I Now Limit My Theosophical Audiences” which, incidentally, resulted in a very good question being asked of me:

“Is there any reason one should turn to you as a guide?"

"No. That Is Another Reason I Now Limit My Theosophical Audiences."

My quick answer was probably partly because of a startling heads-up I received long ago having to do with the German word Ubermensch.

The heads-up I am referring to took place several years before my Theosophical talk at the Society's national headquarters in Wheaton, Illinois. At that time I was still in graduate school at the University of Wisconsin—Madison . . . and also at that time for some reason I thought that it would be a really good idea to use self-stick letters and spell-out UBERMENSCH on the back of my Vo 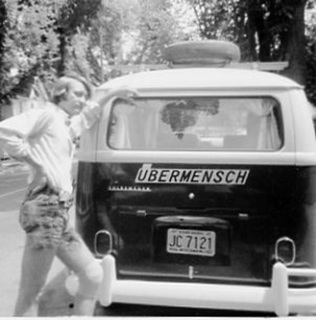 I cannot exactly remember why I did this. It might have been because I wanted to evangelically promulgate some weird combination of Vedanta, H.P.Blavatsky's Sixth Root-Race, and Fredrick Nietzsche . . . or more likely, just because I thought it would be funny having other drivers see an obviously deluded “Super-Individual” driving around in an obviously declasse “Sub-Powered” vehicle. In any case, the resulting consequence—which I will reveal later—of my public Ubermensching made me realize that I henceforth needed to be much more careful about giving even the slightest impression that I seriously considered myself advanced enough in some Self-aware, Adept, or even Ineffably Superior way to qualify as anyone else’s soteriological ("salvational") guide.

This did not mean, naturally, that I instantly stopped talking and writing about potentially invidious, "people-ranking," esoteric subjects like "Psycho-Maturation" and the even more arcane and feather-ruffling "Hierarchy of Self-Awareness" which unabashedly assigns "DEGREE NUMBERS" to individuals, not based on their intellect, race, or other common etcetera, but rather on their progress toward full Psycho-Spiritual Operational Attainment. Also, this did not mean that I instantly stopped covertly regarding myself as a foremost expert about certain less esoteric/arcane things, particularly meditation.

Therefore, even with the aforementioned cautionary personality adjustment already solidly in place, I probably had an overly supercilious attitude when I attended someone else's early-morning group activity called Music Meditation.

Here about a dozen of us dragged ourselves into a big tent which had been set up on the beautiful Wheaton grounds, sat down on some butt-rut-producing folding chairs, and simply listened to some extremely slow classical music for around a half-hour. Admittedly, this was more beneficial than a "Television Meditation" would have been; however, after Music Meditation was over, I whispered to another coagulated sitter that in some ways it did not seem nearly as worthwhile as an "Extra-Forty-Winks-Postponement-of-Getting-Out-of-Bed Meditation" would have been.

Looking back, I do not think I should have been so critical of Music Meditation. Indeed, now I tend to regard almost anything labeled meditation as, at the minimum, some sort of finger-crossed strategy for trying to sling-shot aspirants in a Transcendental direction. Furthermore, now I tend to regard all those who are even occasionally willing to give this Sedentary Olympic event a try as being potential members of the Cosmologically Curious Club—the slightly secret alliance made up of, in Baudelaire's words, "all individuals who have at least cultivated a little taste for the Infinite."

But "cultivation" is one thing; "harvesting" may often be something else.

My intention is not to diminish the value of stand-alone, conventional meditation. Certainly, of all the activities of my life, I continue to regard my regular daily session/s as being the most important. Sat-Chit-Ananda: "Being-Mind-Bliss." While full celestial-grade Bliss might not be achieved every—or possibly even any—time, my own experience has been that meditation almost always does keep many of its Upgrading promises: rebalancing, reviving, uplifting, repairing, refining, etc.—basically just helping one progress, in usually less than an hour, through the first five Levels of differentiated consciousness and then perhaps edging into the Sixth-LEVEL, more rarefied, Ananda-ish, semi-Undifferentiated (Buddhi-manas, "Spirit-mental") type of inner experience.

Then, of course, there are the bonuses. These are the beneficial "after-effects" which may last for a few minutes, a few hours, or perhaps longer. In the shorter term they are commonly tone-raising or stress-reducing in nature; however, in the longer-term it is worth noting that the Transcendental Meditation™ organization actually has respectable, peer-reviewed scientific research showing that their form of general meditation may, over time, even improve physiological things like cardiovascular health.

Still, all such bonuses are probably not powerful enough to turn a person's daily life into a beatified breeze. And adding many more hours conventionally meditating may not help things either. Actually, there could even be some danger that certain individuals might experience considerable difficulty returning to normal functioning because of too much "lingering numinosity." Show me a really full-fledged, kamikaze-grade mystic and I may possibly show you, for example, someone who is often too "Spiritually-spaced-out" to efficiently control a classroom of high school students—or perhaps even be a consistently reliable street-crossing guard for getting their little brothers and sisters to and from school safely.

So, rather than going way-overboard with conventional meditation, a person might want to start developing a custom-designed "Operator's Manual" instead. This would be comprised of a wide variety of strategies, disciplines, and self-help approaches, not only the common ones like altered breathing-pattern exercises (pranayama) which can be found in abundance on YouTube, but perhaps even some less-common “contrarian” psychological ones, a few of which I may have already mentioned in passing on theosophy.net.

I probably have more than a dozen such "aspirational-experiments" popping-up-popping-down-and-usually-popping-back-up-again as I continue to perfect my own Operator’s Manual. All of these strategies/practices work well for some particular purpose and at some particular time; however, none can be considered the universally effective “one-trick-pony” I can ride everywhere I want to go in terms of health, vitality, motivation, equipoise, and perhaps even the "psychological lightness/effervescence" I remember so well from graduate-school days.

Anyway, because of my necessarily multifarious churning and re-churning approach, I would not make the kind of personal life-guide who can offer a simple Spirituality-Made-Easy regimen which other aspirants have the slightest chance of being able to completely figure-out, much less follow precisely. My Path is the Path of Many-Trick-Ponies.

It may be surprising to some that working on such a pragmatic, psychologically-oriented Operator’s Manual can be considered a religious activity—and one, perhaps in uppity unfalsifiable defiance of every science-strait-jacketed atheist on the internet, which may be very much on the verge of re-establishing itself in the world.

I say re-establishing because "The Perennial Religion" would undoubtedly be just another name for "The Perennial Philosophy" which has been around in one form of expression or another from at least Vedic times. Using the "neo-Theosophical" language I prefer, there would be the same-old, at least esoteric, emphasis on the importance of improving an individual's DEGREE of Undifferentiated Self-awareness (Atman-awareness) in order for him or her to 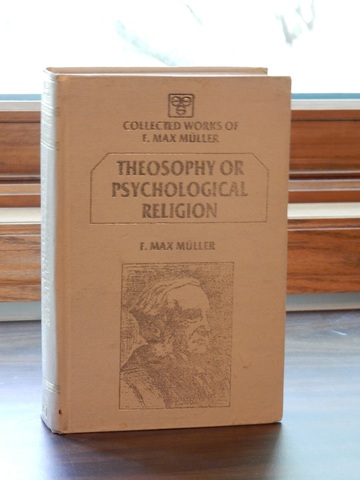 better "Superintend" the LEVEL of differentiated consciousness he or she is utilizing/indulging at any particular moment.

Interestingly, even a title from one of H.P.B. Blavatsky's most referenced authors, F. Max Muller [1823-1900; famous for his 50-volume SACRED BOOKS OF THE EAST], associates psychology, religion, and Theosophy. The book is called THEOSOPHY OR PSYCHOLOGICAL RELIGION.

The general foundation of Muller's work is a time-honored one: that physical, emotional, and mental I-am mistakes ("semi-Selves") are the psychological detours which keep individuals going down all those rough, karma-collecting, alternative highways without receiving any Road Assistance from Ubermensch.

But what is Ubermensch anyway? What is this "Over-man" actually supposed to be over?

The Sanskrit word manas may provide an answer. Manas: "The linear-thinking mind." While this opens a subject far too extensive for the present blog offering, let it suffice to say that dispassionate ideation/neutral cognitive operation is the final "product" of Darwinian evolution—and therefore the hardest type of "tainted" psychological consciousness to volitionally Superintend. Again neo-Theosophically speaking, it is associated with the Fifth-LEVEL of differentiated consciousness . . . which, of course, takes personal advancement to at least the Sixth-DEGREE of Self-awareness in order to Adeptly maintain a "Once-Removed Vantage" upon. . . .

WARNING: In connection with the above, if your own progress by means of your own Operator's Manual should someday convince you that you have at last made it to a Hierarchical Rank of 6.1 S-A or over and this starts to temp you to advertise WORLD TEACHER, GLOBAL GUIDE, or UBERMENSCH on the back of your motor vehicle, please feel to profit from the same heads-up I once received:

When I returned to my Microbus which had been parked down on campus one day, in very large and unpleasant letters on its dusty back window someone had scrawled the word . . .

Thank you for the attention you were recently able to give my blog contributions. I will continue to consider all of the thoughtful points you raised about them.

I would like to ask you a favor. Would you be willing to copy and perhaps, if you wish, move both of your commentaries to the Forum section of the website? The reason for this is a mistake of mine: I should not have allowed other writings to be directly attached to my blog items in the first place. I now realize that some of my contributions get picked up by Google, and I would definitely prefer not having the initial thing which potentially interested new people see after they have typed-in the word Theosophy is yet another example of the same-old, sometimes contentious arguments and debates which have often characterized and often damaged the Society's image for so long.

In any case, moving your material to the Forum (perhaps under a simple subject-title like "Ubermensh Discussion") might actually have the effect of encouraging many more site members to offer their own insights etc about the material. I would much appreciate this favor.