One Reason I Now Limit My Theosophical Audiences

Several decades ago I was asked to speak at a Theosophical summer convention held in Wheaton, Illinois. My 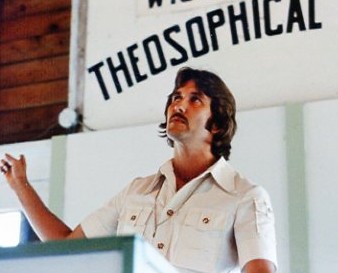 message then (as it continues to be now) was that at least some of H.P. Blavatsky's [1831-1891] "esoteric" teachings (e.g., "Rounds," "Root-Races," "Sub-Races," etc.) could have been speculatively produced by making as-below-so-Above ANALOGIES out of the six varieties of psychological consciousnesses which ancient/modern sages, yogis, and perhaps even Blavatsky herself, may or may not have introspectively observed while meditating.

I surmised then, and still surmise now, that the more important, down-to-earth value of such an exercise might actually come from reversing the process: that is, using the more familiar one-half of the Hermetic Emerald Tablet axiom, the as-Above-so-below, to help identify the psychological "Levels"—the belows—which were used to analogically produce Blavatsky's grand transcendental Cosmogenetic and Anthropogenetic teachings—the Aboves.

For some reason I thought that this pragmatic type of esotericism would be of enormous interest to the Theosophists attending my talk that summer. After all, the psychological Levels of consciousness I was outlining are where the myriad of "tainted I-am's" of every flavor (animating, physical, emotional, and mental) not only show-up, but also screw-up, most people's chance for complete Adept management of their normal waking lives. Such temporary identity-mistakes continually arise, pass away, and then either re-arise or are immediately replaced by other identity-mistakes—the churning mishmash thereby perhaps qualifying, right after everyone's inevitable death, as the second-most basic "human condition" of all. . . .

Finally, maybe predictable as well, I suppose, should have been the powerful, long-lasting result my talk would have: specifically, that even to this day I have never again been asked to speak from a national Theosophical podium. . . .

Re your question: "Offering advice on 'complete Adept management of their normal waking lives' seems a lofty goal. Is there any reason one should turn to you as a guide?"

Answer: No. That Is Another Reason I Now Limit My Theosophical Audiences.