The initiations of Krishnamurti( an astrological biography).

The Initiations of Krishnamurti:
An Astrological Biography
(From the book of the same name by Phillip Lindsay © 2002)

Krishnamurti remains probably one of the most controversial figures of the twentieth century and has been the subject of several biographies, but none to date that has exhaustively treated the subject from an astrological viewpoint – as the above title indicates.

One of Krishnamurti’s (K) more well known associations is with that of the Theosophical Society [1] who hailed him as the medium for The Christ or World Teacher. However, he basically rejected the mantle of World Teacher or being a medium for The Christ (also called Lord Maitreya); this was the plan that was laid down by his Masters, and of course his own soul ‘agreement’, before he incarnated. K exercised his free will and chose the path he thought best.

Because of the hype generated by the Theosophical Society and the media for his proposed role on the world stage, K publicly turned his back on the Masters. It was not that he denied their existence, but basically saw them as just one more authority that had to be ignored if one was to fulfill soul purpose.
A leading light of the TS was Charles Leadbeater, occultist and clairvoyant, who first discovered K as a 15 year old boy playing on a beach near Chennai in India. Leadbeater said that it was one of the most wonderful auras that he had ever seen and ‘without a particle of selfishness in it’.[2]

From there K was cultivated by the TS via his two mentors, Leadbeater and Annie Besant. He was educated and anglicised over a number of years, as a gradual grooming for his future role as World Teacher, that theosphists rightly recognised as his destiny.

However, as with all groups, certain crystallisations and illusions set in, wherein the original organism becomes an organisation. Power struggles and internal politics were going on constantly, not to mention a somewhat idealistic fervour whipped up over K’s future role on the world stage.

All the while K was going through recapitulations of initiations he had taken in previous lives, and was well supported and nurtured by Besant and Leadbeater in this process. As he was approaching his Third Initiation, K’s ‘process’ was extremely painful as his crown chakra was opening up. Approaching his late 20’s, he became increasingly disenchanted with TS politics, and eventually so fed up that he left the society. Just before this he said: “There is a quiet rebellion within me, surging quietly but surely…you don’t know how I abhor the whole thing, all the people coming to meet us, the meetings and the devotional stuff. It all goes against my nature and I am not fit for this job.” [3]

The rebellion in K can certainly be seen in his horoscope, with the planet of rebellion and revolution placed opposite his somewhat stubborn Taurus sun, and ‘T-squaring’ his Aquarian ascendant.

Notwithstanding, by 1925 he had taken these two higher initiations, or expansions of consciousness, and was starting to develop his own philosophy, brought out in one of his famous speeches where he stated “Truth is a pathless land.”

He urged his followers to reject authority, which included gurus and the Masters, yet he refused to be an authority or leader to them.

Krishnamurti had a ‘Parsifal-like simplicity’ - in his highly advanced unfolded consciousness, he did not realise that most of his audiences were nowhere near his stage of the spiritual path. Yet he talked to them as if they were, while many were still struggling with far lesser stages of unfoldment.

In this respect he left many people foundering by asking them to reject everything else, but not providing anything that was understandable for them to use.

Even the Lord Maitreya purportedly said: “…although Krishnamurti was right to emphasise the necessity for independent thought, he was wrong in assuming that everyone else, regardless of past Karma and present limitations, could instantly reach that point which he himself had only reached through lives of effort, and by the aid of those Cosmic Forces apportioned him solely for his office as Herald of the New Age.” [4]
K dropped another bombshell when he dissolved the Order of the Star, a group set up soley to promote him. By this time there were many theosophists totally disenchanted with K, yet his popularity in other parts of the world with new audiences discovering him was not waning.

Krishnamurti went on to teach in many places around the world to thousands upon thousands of people. His Moon in Sagittarius is a symbol of the teacher who contains within him a treasury of wisdom. His Moon was opposite Venus in Gemini, planet and sign of engaging dialogue and communication. As Jupiter conjoined Venus, this dialogue was extremely philosophical and expansive.

At various times before and after K’s disassociation from the TS and the Order of the Star, the ‘over-shadowing’ process from Lord Maitreya was tangible and real: “All at once the hall filled with a tremendous power which was so evidently flowing through Krishna…everyone in the room was most powerfully affected…one of the greatest experiences of our lives.” [5]

The initiation process is determined astrologically: “The times and seasons are ascertained through esoteric solar and cosmic astrology; this being based, of course, on the correct figures, the true mathematical conception, and a real knowledge of the basic facts concerning the planets and the solar system. The horoscope of the initiate is also invariably cast so as to check the time for an individual initiation, and only when the individual signs blend and coincide with the ceremonial chart by which the Initiator is guided, is it possible to perform the ceremony. This is the reason why sometimes initiation has to be postponed to a later life, even when the initiate has done the necessary work.” [6]
The author’s enquiry into the propitious times for initiation has been minutely investigated, and significant dates fulfill the required criteria for the specific initiations. For instance, Mars and the Moon are said to cause a ‘fearful conflict’ at the Third Initiation. Mars in K’s horoscope was certainly taking a pounding from transiting Pluto at the time, and his Moon was returning to its natal position by secondary progression.

There have been many techniques given for esoteric interpretation of a horoscope, and The Initiations of Krishnamurti certainly attempts to apply many of these in the most practical way possible.

Krishnamurti had several ongoing interactions with his Masters throughout his life, including some major events that occurred around 1948, with a resumption of his process and the pain associated with that. He went on to produce many books from his dialogues and talks, and lived until 1986, where he finally passed over at the age of 91.

One major insight that comes from studying Krishnamurti’s chart is his humanity. Even at his advanced stage he had an imperfect personality that his soul had to utilise. He still had a shadow that needed redeeming, and he worked in a world of duality.

The Dalai Lama has called Krishnamurti one of the greatest philosophers of the twentieth century, quite an accolade coming from such an auspicious leader. Krishnamurti’s philosophy has polarised many in the spiritual communities of the world, yet his life was extraordinary and he made people think.

There remains the extraordinary paradox that K took the Arhat initiation of liberation, yet in some quarters his incarnation was not regarded as successful. Yet he demonstrated his humanity, his affection, vunerability and genius, inspiring many, and by that measure the incarnation was surely a success.


[1] The Theosophical Society still exists today and facilitates a valuable forum for all world philosophies and religions. There are many branches in Australia and New Zealand as well as the rest of the world.
[2] Krishnamurti: The Years of Awakening, Mary Lutyens, pp.21.
[3] Ibid. pp.138-9.
[4] Through the Eyes of the Masters. David Anrias. Pp.65-7.
[5] Krishnamurti: The Years of Awakening. Mary Lutyens, p.55.
[6] Initiation:Human and Solar. Alice A. Bailey, pp.142-3. 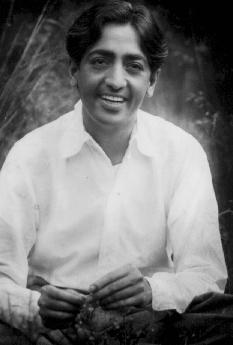