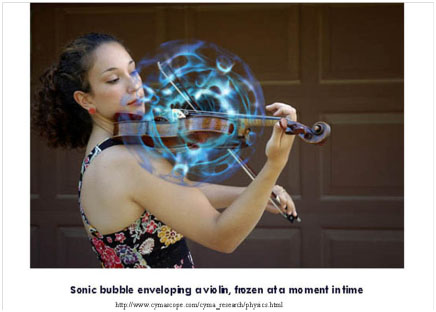 In "Isis Unveiled" H.P. Blavatsky writes:
"Spheres unknown below our feet; spheres still more unknown and more unexplored above us, between the two a handful of moles blind to God's great lights and deaf to whispers of the invisible world..."

While visiting the Christian Science Center in Boston in the late sixties I noticed that they had an unusual interactive display. A long ramp or bridge that spanned between the two ends of a very large circular sphere that was hollow and attempted to duplicate the earth in miniature. This replicate of the earth was set up so that one could actually walk through it and see it from the inside looking out. This planetary replica of the earth was maybe 40  feet in diameter and lit from within.

I had arrived early and the facility was almost entirely empty from other visitors. Spontaneously as I began my passage out across this walkway or bridge within this sphere I began to whistle. As I moved out towards the centre of the sphere I noticed the sound of my whistle reverberated with unusual clarity and created many different and unusual sound effects each step I took.
Upon reaching the very center of the sphere I realized the sound I was making did not echo to the right or left or in front or behind of me but seemed to be coming from all directions at once. It was truly an omni-directional sound. As incomprehensible as this seemed to me if I shifted and adjusted my head slightly forward or backward by inches there was a unique position that the sound reverberated with such penetration and power it seemed to be coming from directly inside of my head - an organ of perception which had suddenly expanded on all sides and become like an immense vibrating spherical bell or globe. I realized that I had clearly moved into some type of subjective experience that was sparked or initiated by my entry into this material sphere or enclosure at the Christian Science Center.
My perceptions of myself as a separate and individual person had suddenly faded into what can only be described as a type of spherical – sound - identity.
I must have become disoriented from this powerful subjective experience for quite some time because when my normal perceptions returned a large group of people and the curator had gathered at the furthest end of the walkway and were quite irritated about my refusal to leave the center of the globe.

Although at the time of this experience I was unable to articulate mentally the full significance of the effect it may have had upon me with any degree of occult or esoteric accuracy I had nevertheless realized at that moment while in the center of the spherical enclosure that.

1. We are spherical entities that have somehow become marginalized, splintered or diminished in essential power when born upon the physical plane and are experiencing life from only one small corner of an infinitely large state of interior recognition.

2. Sacred geometry is not about mere aesthetics or studying intellectually pretty pictures but has the inherent potential to reveal hidden spiritual dimensions within each person if ones approached is from the correct angle and right interior focus.
(My life was about to be dominated almost exclusively by those two phrases, "approaching from the correct angle" and the "right interior focus".)

3. Sound is not something we can hear only with our ears but can comprise many vibrating energies and forces that make up hidden and subtle levels of reality.

4. All prayer and meditation is the art of moving from the periphery of our individual self consciousness to a spherical and multi-dimensional center. As individual persons we are like scattered and random fragments of light that only with the right technique and discipline can be brought together into one searing laser like beam of focus. This focus has an entry point and a place of exit that is surrounded in a spherical type of perception. Each person has an "inner ear" that must be found and trained to open its awareness to a wider and more vibrant perception of existence.
While it took some years to explore the personal significance of this experience I could not help but ask the question that if this spherical perception can be realized within an individual person is there undiscovered a similar but even more profound recognition that can be realized or understood by focusing inwardly on the subjective entirety of the earth and all of its inhabitants.

While reading the Secret Doctrine by Helena P. Blavatsky many years later I came across this passage that seemed to help clarify my earlier experience and show the universality of the spherical shape.

“The symbol of an Egg also expresses the fact taught in Occultism
that the primordial form of everything manifested, from atom to globe,
from man to angel, is spheroidal, the sphere being with all nations the
emblem of eternity and infinity—a serpent swallowing its tail. To
realize the meaning, however, the sphere must be thought of as seen
from its centre. The field of vision, or of thought, is like a sphere
whose radii proceed from one's self in every direction, and extend out
into space, opening up boundless vistas all around. It is the symbolical
circle of Pascal and the Kabalists, "whose centre is everywhere and
circumference nowhere". .. (STANZA ll, SD I, p. 94)

Later in my spiritual meditations and disciplines I realized that all of the chakras or spiritual centers spoken about in all advanced yogic training were based on the idea of spherical energy, sound and light.
Each sphere could nest or interface with a myriad of other spheres simultaneously without losing its own essential identity.
When the veneer of the personality is finally removed or transcended we come to realize our identity is actually spheres within spheres within spheres.

Going within and seeing from the inside out!!!

Taking our inspiration from this previous passage of HPB's let us explore graphically in the next few images the idea of moving to the midway point within a spherical life and try and associate our identity with the very center rather than its periphery. By "acting as if" and using the creative imagination powerful forces are set in motion.
The question each student must ask themselves is what would reality look like to those hidden spiritual forces of the Universe as they looked out through this intricate matrix of geometric lines of energy and force and tried to contact those of us who live and dwell in the heavier and more inert physical planes. 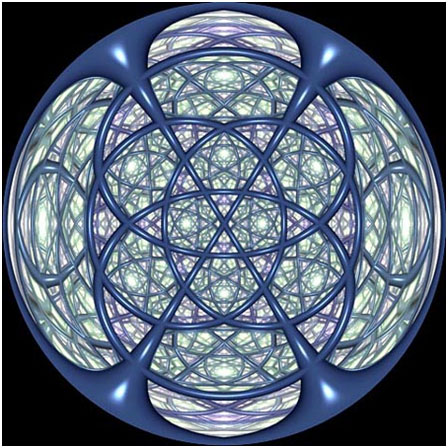 Similar to the images in
the 'Wada Basin' Section:

Because  “God geometrizes” These various polyhedra
spherical shapes  may be far more
important to the initiated seer then what may appear as merely some pretty
stain glass motifs. When they are reproduced on the high mental through
visualization these  archetypal patterns
and geometric forms may become  the
medium through which the divine may use to express those revelations for which
most spiritual students of the ancient wisdom teachings may not be familiar
with.

We know what  different polyhedra or  spherical  lives
might  look like from outside of
their integrated and complex bodies. It is not until the advent of modern
computer  graphics and animation that we can
actually get a glimpse of what they might look like in 3-D motion or if we
were  positioned on the  inside of their complex shapes and were
actually looking out. All advanced esotericism we know demands that we see occultly
from a "point of originating cause to its effect".

All light, sound and spiritual geometry  however ethereal   first
emerges or is  born out of primal
abstraction and darkness. To follow back to the source  of this abstract state of the
"no-nothing" and the "no-thing" may be assisted by new
tools and new types of creative exploration. The next animation found at the
website listed  below  demonstrate the potential of seeing the rays,
planes and different bodies  in an
organic and holistic -fluidic state. The last and final mystery which must be
revealed is what lies at the Heart of all spherical lives and what unknown and
hidden quality of Fohat or Will animates them.