An Open Letter to the Integral Yoga Community
by Lori Tompkins
1 May 2012
[Originally posted on Circumsolatious]
I recently read Julian Lines’ Open Letter as published on Religious Fundamentalism and Integral Yoga in which he addresses the controversy over Peter Heehs’ biography of Sri Aurobindo and encourages the Integral Yoga community to behave in a manner less hurtful (i.e. disgraceful) to the legacy of Sri Aurobindo and the Mother. He encourages resolving disputes with a high level of moral and intellectual standards and concludes,

‘Any whiff of book banning, ostracism and fascism in our community does more harm to the name and legacy of Sri Aurobindo around the world than the book itself could ever do. The venom of past conflicts still poisons our collective well. Let us all try to resist pouring forth a fresh batch.’


I continue to wonder how much time will have to pass before significant numbers of students of Sri Aurobindo and the Mother will begin to understand the truth of what exactly has poisoned the well of the Integral Yoga community. Infighting is an effect. It is certainly not the root of the problem. The root of the problem/poison is a profound ignorance of and disregard for the Supramental consciousness-force which Sri Aurobindo and the Mother incarnated to announce and establish. It is a profound ignorance of and disregard for the Vedic Gnosis, the sanatana dharma, which they incarnated to restore. It is this ignorance and disregard which caused the builders of the Mother’s Temple to disfigure the Mother’s sacred geometry/sacred measure/sacred gnosis. It is this same ignorance and disregard which fosters the illusion that the question of Sri Aurobindo’s avatarhood and avataric mission is a matter of opinion and of no real consequence in terms of his legacy and in terms of what people understand of his life. And it is this same ignorance and disregard which scoffs at the idea of Sri Aurobindo’s reincarnation. Readers may think that Vedic Gnosis, the Mother’s Temple, Sri Aurobindo’s avatarhood and his reincarnation are all very different issues, but these matters are inseparably linked. The Mother’s Temple (her original design) is a monument of Vedic Gnosis and it contains in its measure the story of the Avatar and his rebirth. The ‘Lotus of the Avatar’ (i.e. the Lotus of Sri Aurobindo) as seen below in Sri Aurobindo's symbol is, after all, the very heart and soul of the Matrimandir [See The Flawed Auroville Temple]. 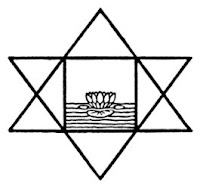 Unfortunately when these important links were pointed out to those in charge of managing the Sri Aurobindo Ashram and to those in charge of building the Mother’s Temple in the mid-1970s by Patrizia Norelli-Bachelet, there was no high moral and academic standard in the community that welcomed serious investigation into and debate of these matters. There was only the prevalent will to squash the message and the messenger. And hence, from the 1970s, the lowly consciousness of those armed only with the tools of suppression of the flow of information and character defamation has been allowed to dictate the course of Integral Yoga studies and pollute the legacy of Sri Aurobindo and the Mother for four decades.
Now leaders of the Integral Yoga community are either going for each other’s throats or are pleading for less embarrassing, more ‘evolved’ behavior. But most all of them refuse to see or to admit that as soon as the Mother’s measures were altered by the builders of the Matrimandir and the Integral Yoga community rallied around the disfigured temple rather than rallying around those who demanded accurate measurements, this entire spiritual community was doomed to crumble under the weight of its own ignorance. Ignorance was the cause of the disfigurement of the Mother’s Supramental Gnosis and surely some sincere students will begin to recognize, through whatever manner of trial and tribulation over the years, that it is not at all wise to celebrate a temple that does not accurately portray HER GNOSIS, HER DIVINITY, HER MEASURE or the FUTURE REALIZATION that her measures were meant to imprint and convey in our new age.

The only real hope for the splintered Integral Yoga community, in terms of un-poisoning its proverbial well, is for the leaders of that community to admit and attempt to understand that the Mother was actually trying to communicate the laws of the Supramental Matrix in the measurements of her Temple. This is unlikely because these leaders would have to admit their own ignorance and seek the guidance of someone they would loathe to admit KNOWS the Supramental consciousness-force and its will BETTER than they.
They would have to seek and respect the guidance of Patrizia Norelli-Bachelet, who has written thousands upon thousands of pages appreciating and elaborating upon laws of the Supramental Matrix as introduced to her by Sri Aurobindo and the Mother. She has documented the entire story of the tremendous knowledge within and the horrendous disfigurement of the Mother’s Temple in her book The New Way, Volumes 1 & 2 and also in Chronicles of the Inner Chamber. She has also written in great detail about the cosmological and mathematical precision which reveals Sri Aurobindo’s incarnation as the 9th Avatar of Vishnu in her book Secrets of the Earth ‒ Questions and Answers on the Line of Ten Avatars of Vedic Tradition. Considering that Sri Aurobindo’s yogic mission included the establishment of an entirely new manifestation ‒ the Supramental Manifestation ‒ on Earth, which the Mother described as an entirely new world emerging in the midst of the old,1 and considering that the Mother herself was well aware of Sri Aurobindo’s intimate connection with Krishna (the 8th Avatar of Vishnu),2 it is odd not only that a long-time Sri Aurobindo ashramite, Peter Heehs, would take the position that the question of Sri Aurobindo’s avatarhood doesn’t interest him very much,3 but also that so many students of Sri Aurobindo and the Mother are equally disinterested.

From my perspective, the only way to purify the Integral Yoga community from the poisons and toxicity of its past and present is a complete re-organization of the community based on the actual laws and living structure of the Supramental Manifestation, as revealed in the Mother’s Temple and as fully flushed out in the writings of Patrizia Norelli-Bachelet, rather than continuing to follow the errant course set by the egos and ignorance of those who took control of the Integral Yoga field after the Mother’s departure. Sincere students of Sri Aurobindo and the Mother must endeavor to fathom and appreciate the Supramental and Vedic Gnosis of Sri Aurobindo, the Mother and Patrizia Norelli-Bachelet before they can hope to correct the colossal errors in judgment and in action made by the community over the past four decades.
But from what I have seen in the last twelve years, during which I became aware of and involved in these issues, I have the feeling that many in the Integral Yoga community would rather chew off an arm than admit that Ms. Norelli-Bachelet actually KNOWS what she is talking about, i.e. that she has any authority in the realm of the Supramental Manifestation. And so onward the Ignorance goes, spewing its poisons and spinning its breathtaking web of lies in the name of Truth. But for those who do learn to fathom, appreciate and cultivate the Supramental Gnosis in themselves, such Ignorance has no real power other than the power to collapse the old world, the old consciousness in on itself.

May our discussions evolve towards the Light and bear fruit,
Lori Tompkins

Footnotes:
1 The Mother on The Supramental Manifestation, 29 February 1956:

‘Lord, Thou hast willed, and I execute, A new light breaks upon the earth, A new world is born, The things that were promised are fulfilled. The manifestation of the Supramental upon earth is no more a promise but a living fact, a reality. It is at work here, and one day will come when the most blind, the most unconscious, even the most unwilling shall be obliged to recognise it.’

The Mother’s Agenda, 10 July 1957: ‘… the old spirituality was an escape from life into the divine Reality, leaving the world just where it was, as it was; whereas our new vision, on the contrary, is a divinisation of life, a transformation of the material world into a divine world. This has been said, repeated, more or less understood, indeed it is the basic idea of what we want to do. But this could be a continuation with an improvement, a widening of the old world as it was ‒ and so long as this is a conception up there in the field of thought, in fact it is hardly more than that ‒ but what has happened, the really new thing, is that a new world is born, born, born. It is not the old one transforming itself, it is a new world, which is born. And we are right in the midst of this period of transition where the two are entangled ‒ where the outer still persists all-powerful and entirely dominating the ordinary consciousness, but where the new one is quietly slipping in, still very modest, unnoticed ‒ unnoticed to the extent that outwardly it does not disturb anything very much, for the time being, and that in the consciousness of most people it is even altogether imperceptible. And yet it is working, growing ‒ until it is strong enough to assert itself visibly.’

‘When and how did I become conscious of a mission which I was to fulfill on earth? And when and how I met Sri Aurobindo?

These two questions you have asked me and I promised a short reply.

For the knowledge of the mission, it is difficult to say when it came to me. It is as though I were born with it, and following the growth of the mind and brain, the precision and completeness of this consciousness grew also.

Between 11 and 13 a series of psychic and spiritual experiences revealed to me not only the existence of God but man's possibility of uniting with Him, of realising Him integrally in consciousness and action, of manifesting Him upon earth in a life divine. This, along with a practical discipline for its fulfilment, was given to me during my body's sleep by several teachers, some of whom I met afterwards on the physical plane.

Later on, as the interior and exterior development proceeded, the spiritual and psychic relation with one of these beings became more and more clear and frequent; and although I knew little of the Indian philosophies and religions at that time I was led to call him Krishna, and henceforth I was aware that it was with him (whom I knew I should meet on earth one day) that the divine work was to be done.

In the year 1910 my husband came alone to Pondicherry where, under very interesting and peculiar circumstances, he made the acquaintance of Sri Aurobindo. Since then we both strongly wished to return to India -- the country which I had always cherished as my true mother-country. And in 1914 this joy was granted to us.

As soon as I saw Sri Aurobindo I recognised in him the well-known being whom I used to call Krishna.... And this is enough to explain why I am fully convinced that my place and my work are near him, in India.'

3 ‘Getting beyond the Conventions of Biography – and Hagiography Too:..., Columbia University Press, August 2008.