The Invisible Founders of the Theosophical Society: Rescue Them from Historical Amnesia

Lately I've been thinking about the original founders of the Theosophical Society listed in Colonel Olcott's account, and how little we know about most of them.  Googling "founders of the Theosophical Society" leads largely to repeated assertions that one, two or three are the Founders and none of the rest count.  Thanks to Marc Demarest, Emma Hardinge Britten is emerging from historical obscurity (although we can't quite say that about fellow-TS-Founder and husband William.)  I've written about Charles Sotheran and blogged about Seth Pancoast, but even for me most of the people on this list are terra incognito biographically and bibliographically.  So I'd like to propose a hopefully fun project of compiling information about all the forgotten or semi-forgotten TS Founders.  I picked one about whom I knew nothing, John Storer Cobb, and have already spent some time researching him online.  Will share the results after some more digging but invite other site members to select different little-known figures from the list of founders.  This 1950 article (scroll down to "Seventy-five Years Ago") from Theosophia, written by Boris de Zirkoff based on research by Josephine Ransom, is an excellent starting point.  But it requires correction on several points, and leaves several large gaps.  For example, John Storer Cobb did not "disappear" but continued to be a public figure involved in causes related to those he championed during his TS days, notably cremation.  Had thought that De Lara's first name was Daniel, but there was only only Delara family in New York at the time with a grandson b1864 named Daniel and a grandfather b1796 named David.

I list them in rough order of how well known they are now, after the familiar H. P. Blavatsky; Henry Steel Olcott; William Quan Judge, the Invisible 21 (with hyperlinks to the E.H. Britten website for the first two and Google Books references for the rest, if I could find them) are:

Comment by K. Paul Johnson on September 11, 2011 at 12:14pm
Have just learned that Francisco Agramonte was a Cuban-born Spanish subject who became a naturalized American citizen shortly before the TS was founded.  He was a slaveholder in 1878 when his freeing of his slaves was noted in a Canadian journal.  And later he became a revolutionary.  He married in New York in 1870.  In 1893 he became a dentist.  These links may not all be to the same person, and I'll follow up later but wanted to share what I had found.

Comment by K. Paul Johnson on September 10, 2011 at 6:55pm
Thanks, L.A.  All the "whatever happened to" research on the Brittens has been done by Marc Demarest, and his website on Emma also includes reports on recent research on George H. Felt, about whom James Santucci had previously published a fair amount.  H.J. Newton and James Wiggin also have a lot of info already done in print.  If you're interested in British Spiritualists, maybe you could do some googling of Charles C. Massey or looking into books?  He was a founding board member of the Society for Psychical Research and fell out with the TS over the various fraud charges, but I have no idea what happened to him thereafter.

The list seems to start with 16 at the first meeting, expand to 21 at the second, and expand to 24, or maybe remain 21, at the third and final one.  Here is a link to the section of Old Diary Leaves that describes them.  We start with 16 (HSO's order): Olcott, Blavatsky, Sotheran, Simmons, Monachesi, Massey, Alden, Felt, de Lara, Britten, Britten, Newton, Cobb, Hyslop, Judge, and Stevens, meeting on September 8, 1875.  At the second meeting we have 18, of whom 5 are new: Agromonte, Ralphs, Horton, Atkinson, and Carlos.  (Meaning three at the first meeting missed the second)  None of these appears in later lists of TS founders or formers.  Yet Horton and Atkinson were both vote counters at the last organizational meeting.  By the final meeting we have Wiggin, Westbrook and Pancoast added, all as officers.  So we should presumably be up to 24 here.  Certainly founding officers are entitled to be called founders, despite Olcott's previous gesture excluding them even from being "formers" because they were not part of the original 16.   But as for some of the others, it's very unclear what their status is.

ITo sum up, when we add all the various lists given by Olcott we end up with a total of 24 names.  13 officers and two vote tellers: 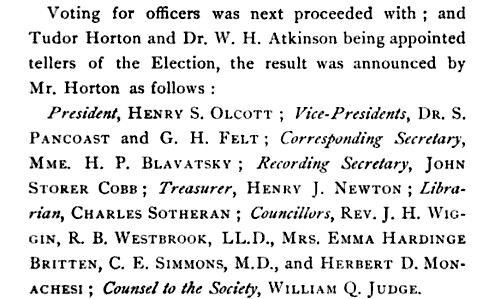 Plus 9 other non-officers named in the previous proceedings: "formers" Massey, Alden, Hyslop, Stevens, Simmons, and William Britten, and later arrivals Ralphs, Carlos, and Agromonte.   Having never seen the latter three included in any list of TS founders, I'll focus on the 21 in this thread.

Thanks, Paul, for the info. I'd checked William Walker Atkinson's Wikipedia and figured he wasn't this Dr. W.H. Atkinson, but thought maybe they may have been distant relatives. There is still that remote possibility, as the obituary for Dr. W.H Atkinson dwelled only on his dental career. Whether they were or not related is of little consequence now, though.

What may be of some interest to Theosophical historians is whether William Walker Atkinson ever had any professional collaboration with Mabel Collins. THE KYBALION, published around 1906, by "The Three Initiates" is now a must read for any Hermeticist.

It's fairly well established that W.W. Atkinson was one of the "Initiates," and Paul Foster Case was the second. Evidently, some people familiar with Mabel Collin's writing site her as the possible third, as some stylistic elements in the book are close to hers. But, that will probably be very difficult to pin down definitively at this point in time.

Comment by K. Paul Johnson on September 9, 2011 at 5:32am
It turns out that our TS advisor Dr. W.H. Atkinson was a Pennsylvania-born dentist who had lived in Ohio before coming to New York.  Here's his obituary.  Whereas William Walker, of the many pseudonyms, was born in Baltimore.  Here's his Wikipedia entry.  Glad you asked, as the same question had occurred to me.

Paul, you've certainly dug deep into Theosophical history. One name stands out to me at the moment, and that is Dr. W. H. Atkinson.

There's a William Walker Atkinson who is one of the pioneers of the "New Thought" movement around the turn of the 20th century. To be brief, this W. W. Atkinson wrote under a number of pseudonyms on the subject of Occultism, Western Metaphysics, applied Eastern thought, etc. He was very prolific and his writings are having a certain "come back," as it were.

The point is, although born in 1862, he'd be too young to have been involved in the beginnings of Theosophy, his father was also named "William," though don't know the middle initial. Not a lot is known about Willam Walker Atkinson's personal life, but there's evidence he was involved professionally with Mabel Collins, mentioned here in another blog as having been at one time influencial in Theosophy.

Question is: Could this William Walker Atkinson be related to Dr. W. H. Atkinson?