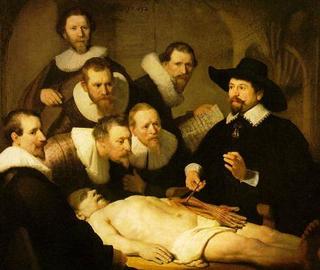 The August 5, 2009 NewScientist features 10 things about humans that science can’t yet explain. “We belong to a remarkably quirky species,” the article says, and “despite our best efforts, some of our strangest foibles still defy explanation.”

Among these supposed flaws are: blushing, laughter, teenagers, dreams, altruism, art, superstition—flippantly, even kissing and nose-picking are on the list.

At one point the writer demands: “what are they for?” Altruism: “most agree it doesn’t make evolutionary sense.”

The appendix never made any sense either to physiologists and doctors, until recently, who once thought of the little worm-shaped organ as some long-ago evolutionary vestigial appendage, and therefore dismissed it as expendable. Like the tonsils, there was little at stake, “because we can survive without it.”

Recently, researchers published a new explanation in The Journal of Theoretical Biology. “The appendix, they suggest, is a ’safe house’ for commensal bacteria, the symbiotic germs that aid digestion and help protect against disease-causing germs,” reported the New York Times in June of last year.

“It has even been suggested that the term vestigial is obsolete, useful only as a reflection of the anatomical knowledge of the day. In fact, these days many biologists are extremely wary of talking about vestigial organs at all,” wrote Laura Spinney in the May 14, 2008 NewScientist.

Watch Videos: No Evidence for Randomness

“Why didn’t anyone check this before?”

Now the New York Times, August 4, 2009, reports that the human spleen may serve a function after all. No longer just a familiar literary device for irritability, the article Finally, the Spleen Gets Some Respect notes, and reports that:

“Scientists have discovered that the spleen, long consigned to the B-list of abdominal organs and known as much for its metaphoric as its physiological value, plays a more important role in the body’s defense system than anyone suspected.”

“Reporting in the current issue of the journal Science, researchers from Massachusetts General Hospital and Harvard Medical School describe studies showing that the spleen is a reservoir for huge numbers of immune cells called monocytes, and that in the event of a serious trauma to the body like a heart attack, gashing wound or microbial invasion, the spleen will disgorge those monocyte multitudes into the bloodstream to tackle the crisis.”

“The parallel in military terms is a standing army,” said Matthias Nahrendorf, an author of the report. “You don’t want to have to recruit an entire fighting force from the ground up every time you need it.”

That researchers are only now discovering a major feature of a rather large organ they have been studying for at least 2,000 years demonstrates yet again that there is nothing so foreign as the place we call home.

“Often, if you come across something in the body that seems like a big deal, you think, ‘Why didn’t anybody check this before?’ ” Dr. Nahrendorf said.

“But the more you learn, the more you realize that we’re just scratching on the surface of life. We don’t know the whole story about anything.”