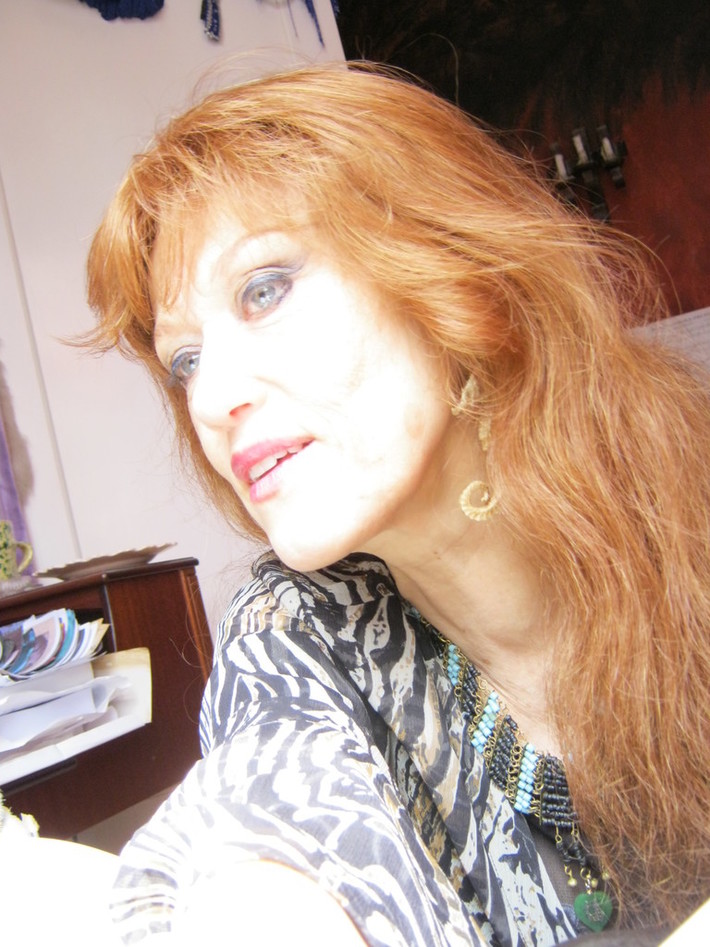 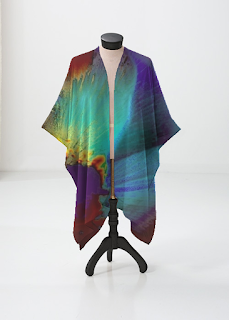 It´s interesting to see the aesthetic relationships these new garment pieces have to your digital work. The fluid transitions between saturated, jewel toned colors are appreciated in both color palates. (I don´t see the medium indicated, but they appear to be dyed silk.) I respond to the long cut of this specific piece, as  the trailing lines of the cape appear to echo the formal divisions between warm and cool hues. The asymmetry of the design creates further visual interest, but isn´t jarring or dissonant. The adjacent piece (a blouse) perhaps offers more of an open field for the painterly design. Without the structure of the garment defining symmetrical boundaries, the washes of green and violet pigment offer surprising contrast when they come up against the lighter half. 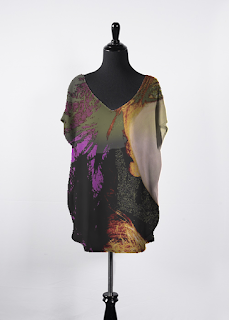 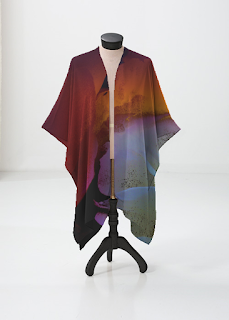 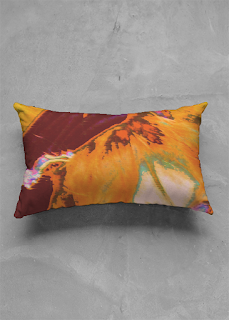 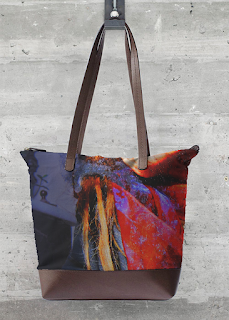 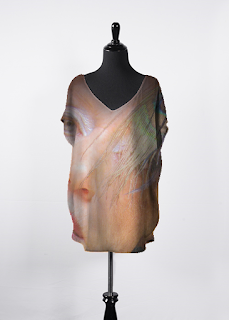 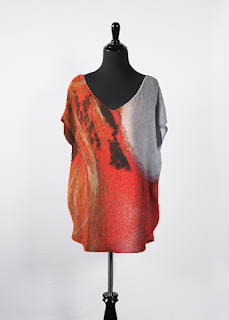 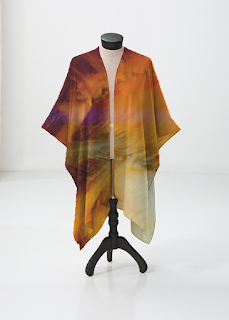 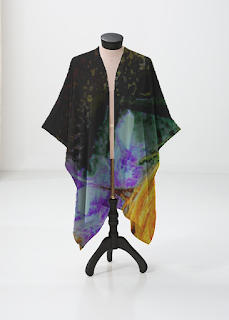 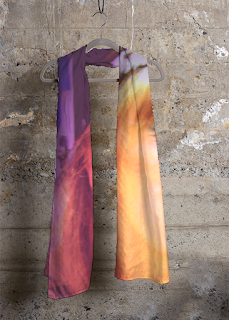 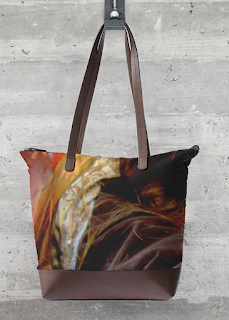 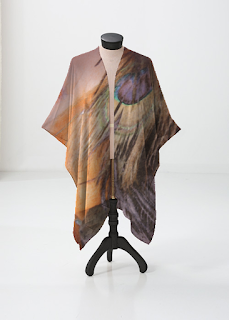 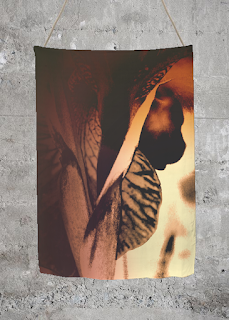 
Presumably a group of self-portraits, this series of Dancer portraits is equivocally voyeuristic in the soft keyhole shadowing of the pictures edges along with the penchant for embellishing costume. I like the tempered restraint of Dancer II, which presents a darker contrast to the overall blue pattern, and a haloed richness in the saturation of the figure´s hair and sienna background. While there´s a decisiveness in the sideways profile of the head, the delicate curl of golden hair points towards her mouth as if to await declaration.

The Red Lady IV had a decidedly different mood despite small actual changes in the model lightning and attire. Being that the subject isn´t fully transformed, I don´t feel that different characters are being created, but that the viewer is invited into the psychological exploration of facets of an archetype. The direct stare of The Red Lady and elevated position of her face above the viewer´s natural eye-line creates an aura of superiority or rebellious dissent, while the conflicting orange and blue hues aid the instinct of competition. In a more graphic way, the figure is also presented as a Pop diva, haughtily looking down on the viewer in her feathered boa. Provocative in stature, the light source seems to glow from within rather than from an external bright light, and therefore she holds our interest and curiousity. Kristen T Woodward Professor of Art, Albright College Reading PA

What makes Swedish artist Eva Fidjeland so unique is her ability to create pieces of art using natural, earthly tones while maintaining a commitment to photography, digital art, and traditional visual art. Eva Fidjeland has the ability to see the elements of the world as they are, including the beauty that is nature and animal life, and recreate them in the form of art that has cultural relevance to audiences across the world. Her cultural pieces would fit seamlessly in any gallery or museum in any part of the world.
(Quote from review written by Dominic Richardson, writer/editor at Art Bracket LLC)
http://artbracket.com/profiles/blogs/eva-fidjeland-versatile-artist-with-perfect-earthly-style

When art captures the essence of the human experience, it reveals aspects of humanity under a bright spotlight. The art emphasizes these qualities directly, pointing observers toward images that will challenge our current perspectives of the world. The artist, as the creator of such pieces of art, is responsible for the design and creation of these images; their process is similar to the process of unveiling, in which the artist will seek to bring the observer closer to truths through images.

Eva Fidjeland´s art brings observers closer to the truth of understanding the human process of healing. Fidjeland´s art exists within an extraordinary global context. The world has separated the concept of healing within a dichotomous line. Eastern cultures typically incorporate healing concepts within their aspects of a life holistically, while many western cultures view healing as the mere recovery of illness or injury. Many citizens of the world carry a perception of healing that lays somewhere in between.


Eva Fidjeland´s art emphasizes the human need to challenge these perceptions through captivating mixed media design, color and examination of the human body. Eva Fidjeland´s art asserts the concept of healing is far from esoteric, promoting the idea that healing is a natural, organic part of the human condition that connects us to the world in which we live.
DOMINIC RICHARDSON, writer/editor at Art Bracket LLC


Primary Forms with a Bold Function

I like the slight melancholy mystery of these images. In general, the softened palette and contrast evokes a faded memory, but the primary forms have a bold function.
`Evolution´ employs a primordial form, spiraling up out of the water like a mythic sea creature. I also see the faintly grainy quality and washed out magenta tonality as harkening back to old photographic documentary film, though I´m unsure of the media/process actually employed here. I find the vertical orientation is also unexpected for the surreal landscape, as the weighty spiral form doesn´t appear able to sustain its upward thrust for long, as it curls into itself.

The piece entitled `Liz´ is an enticing picture as well; some more direct photographic reference to lizards is evident, but there is also a diffused manipulation of the image that muffles direct or overt pictorial representation. The resulting image calls to mind pictographic symbolism from a host of ethnic traditions and artistic eras. In this way, `Liz´ reminds me of a mellowed Florence Putterman painting. So the piece seems less about the natural subject depicted, and more about the state of flux, or evanescent movement.
(Written on May 11, 2013 by resident curator Kristen T Woodward, Professor of Art at Albright College in Reading PA, USA). http://artists2artists.net/photo/Liz

”Eva Fidjeland´s poems are potent with a powerful kind of beauty and zest for life, far from the romantic kind”.     http://paganpoet.com/Eva-Fidjeland-artist-poet-photographer 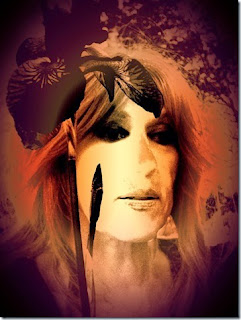 Eva Fidjeland has not received any gifts yet 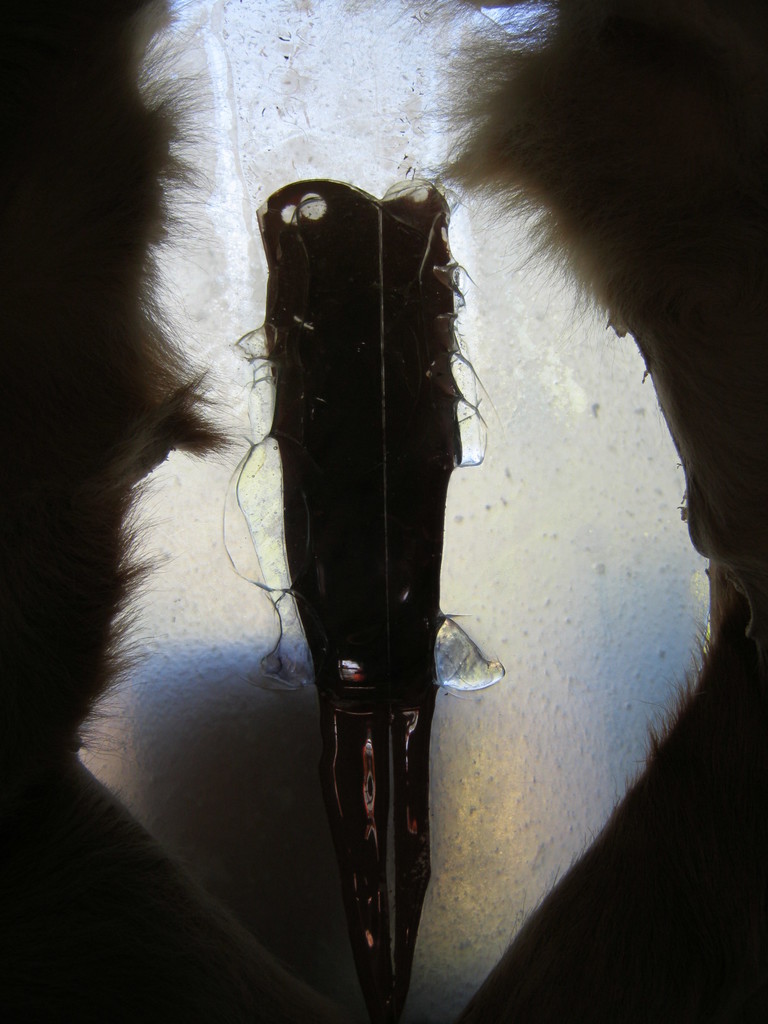 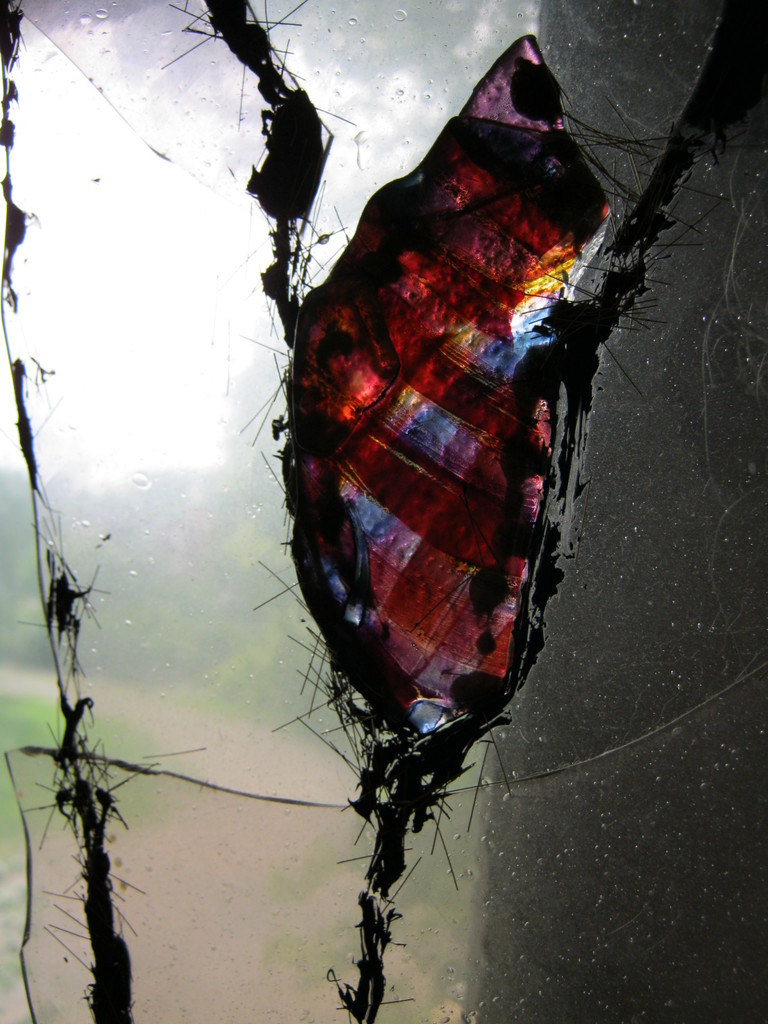 Photographer Eva Fidjeland - one of several artists to show their work at the AthensArt's Annual Arts Festival at Hardeko in Bispgården, Jämtland, Sweden Posted by Susanna at 8:23 PM, Apr 19, 2014 (…

Photographer Eva Fidjeland - one of several artists to show their work at the AthensArt's Annual Arts Festival at Hardeko in Bispgården, Jämtland, Sweden

Welcome to the forum!  It's good to have you here and I look forward to getting to know you.  Feel free to look around and participate in the discussions, too.