The Scientific Way To Improve Your Writing

Ok so I'm swiping this from Fast Company that swiped it from Buffer, either way it's a good article for those that are Writers and or Bloggers, even running a social media site plays by these rules.. It's a good read if you're interested and it might even help you to write your next engaging email! Seriously :)

(the original articles are linked above, but here's the best worded one IMO)


HOW DO YOU HAVE THE MOST IMPACT ONLINE? SHOULD YOUR WRITING BE SHORT AND SWEET, OR LONG AND DETAILED?

There are lots of times when I’m stuck on a title for a post, or the perfect word for something I’m writing.

Fortunately, we’re pretty keen on experimenting and testing here at Buffer, so I can try lots of different ideas and see what works best.

Even better, though, is having some data to give me a rough guide on where to start. I found some really useful data about crafting the perfect blog post or copy, and hopefully you’ll find it useful too.

Upworthy is arguably one of the most successful content marketing companies around, with massive successes on social media to their name.

One of the tips Upworthy offers from analyzing their own success is to ensure every headline has a “curiosity gap.” That is, the headline needs to be tantalizing enough to get a reader to click through, but mustn’t give away the whole story.

A great example comes from an Upworthy story about Mitt Romney:

Too specific, so readers already know the whole story: Mitt Romney Says, “I Want The Middle Class To Be Tied To The Roof Of My Car.” 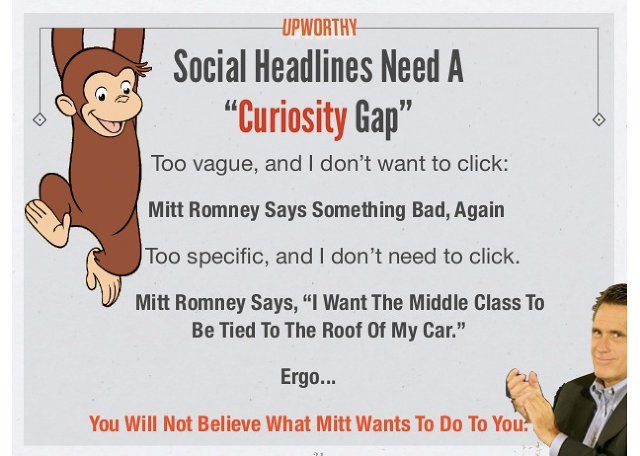 The final title ended up being: You Will Not Believe What Mitt Wants To Do To You--just enough intrigue to encourage click-throughs and still enough mystery that the payoff of reading the story will encourage readers to share it.

2. USE NUMBERS: OUR BRAINS CAN UNDERSTAND IT MORE EASILY

BuzzFeed is a perfect example of just how popular listicles can be. It’s not really surprising, either, given how we’re constantly bombarded with content and don’t have time to read it all.

The Takipi research found that while numbers work well in headlines, digits in particular are more shareable. For instance, instead of “Ten ways to…” you should use “10 ways to…”

In the analysis, higher numbered lists (e.g. “100 ways to…”) were shared more, as were headlines that started with a digit. 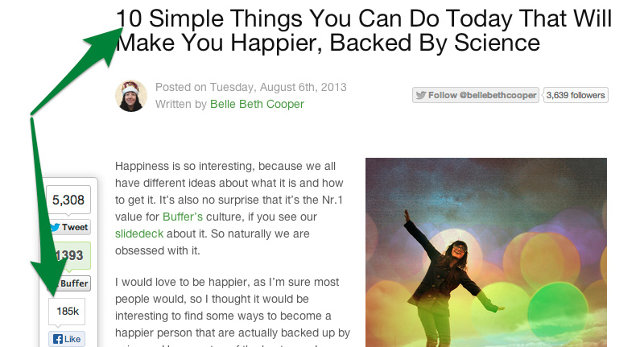 The scientific back-up: These stats are backed up by the research of Stanford Business school professor Chip Heath and corporate education consultant Dan Heath, who found that one of the six principles of all ideas that “stick” is to make them concrete--using digits and specific facts rather than broad statements.

3. CHOOSE THE RIGHT WORDS: THESE ARE THE 27 MOST RETWEETABLE AND SHARABLE ONES

Specific words are more popular than others, particularly in headlines. From Takipi’s research, the most popular blog posts had these words in their titles:

Back to blog post titles, though. Interestingly, Takipi’s research found that using the word "you," which many of us (me included) assume is one of the most powerful words we can use, actually didn’t have any effect on how many social shares a post got. 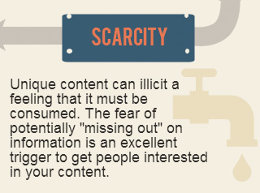 The team from Takipi analyzed a bunch of tech blogs to see which posts were shared more on social media than others, and what they had in common. One of the things they found was thatusing negative, dark, and aggressive words in titles lead to more shares.

For instance, including the words no, without, and stop lead to more shares that more positively framed titles using words like do or start. Another part of this finding was thataggressive or violent-sounding words encouraged more social shares, as well. For instance, words like kill, dead and fear seem to be more shareable.

The Takipi post provided a good example of this from three similar articles on TechCrunch, where these two headlines were extremely popular:

But this headline had less than a third of the number of shares that the other two garnered:

For Oracle it’s about the machine, not the fantasy of a new world

Solution: Of course, writing about negative things or trying to make things negative isn’t that great of a way to help us lead a happier life, which is what we’re all about. So, one way to use this technique is to still focus on the positive, but to turn it inside out. Here is an example where this worked very well for us:

5. DON’T EXPECT ANNOUNCEMENTS TO BE POPULAR (AND TURN THEM INTO A STORY INSTEAD)

One of the most interesting things I found in my research was about what doesn’t work. It turns out that announcements generally get shared the least.

In Takipi’s research of tech blogs, posts including the words "announcing," "wins," "celebrates," or grows usually fell near the bottom of the most-shared list.

Using the word "lose," on the other hand, usually landed a post in the top 50% of the list, backing up my earlier point that negative words seem to be more shareable.

Solution: Since we know that announcements can be boring, create a story instead. One example where we had this work incredibly well, was when we announced the 1 million user milestone for Buffer. Instead of making it an announcement we made it into a story full of pictures and events that happened throughout the Buffer journey.

Story-telling is in fact the most powerful way to activate our brains. You can in fact, create the exact same emotions that you had when experiencing a situation in the other person if they are listening to your story. This Neural Coupling modal describes it best:

The same emotional areas of the brain are activated in the listener, that the speaker experienced as he tells a story of an event: 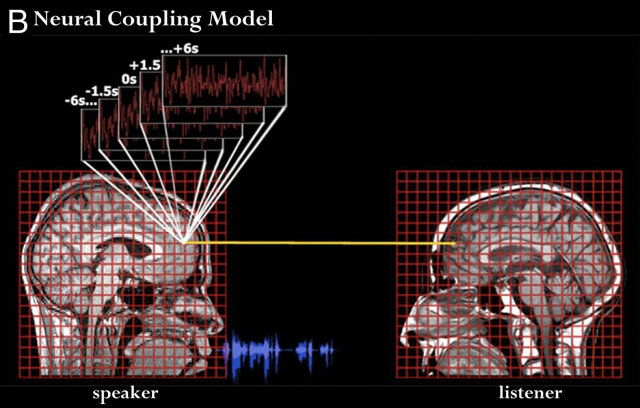 6. KNOW EXACTLY WHO READS YOUR POSTS AND TAILOR YOUR WORDS TO THEM

As with most of the social media topics we discuss here at Buffer, your particular audience will determine what works best for you.

Upworthy noted that middle-aged women are the biggest sharers online, so there’s a pretty high chance you’ll want to get them on board if you’re trying to increase how much your content gets shared.

This could mean avoiding jargon or slang, keeping your word choices simple and your sentences short, or avoiding swearing.

The trick to getting it right for your audience? Test everything.

We often try multiple headlines for the same Buffer post to see which one will work best on social media and we’re sometimes surprised to see a big difference between our tests.

Research has actually shown that different audiences will respond better to different messages. One study used two different marketing messages for TiVo: one that used abstract messages about the freedom TiVo offers, and another that used more concrete messages emphasizing specific features of TiVo.

Keep in mind your audience and their attitudes and goals when crafting your copy or tweaking your headlines.

7. MAKE IT SURPRISING (OUR BRAIN LIKES IT!)

Another of the six principles of ideas that “stick” from Chip and Dan Heath’s research is to use the element of surprise.

Presenting something unexpected--breaking a pattern--will help you to capture attention, according to their research.

This works in two parts: surprise captures our attention initially, and interest holds it.

We often try to use this in our Buffer posts, for instance:

Why is this so powerful? According to Dr. Gregory Berns unexpected rewards have an incredible power on us:

“This means that the brain finds unexpected pleasure more rewarding that expected ones, and it may have little to do with what people say they like,”

So surprises are more stimulating for us and will get our attention much more easily than things we already know well. Even if we really like those things!

8. USE MORE VERBS AND LESS NOUNS

I’ve mentioned which words are the best to use, but knowing which types of words are best can give you more flexibility.

Social media scientist Dan Zarrella analyzed 200,000 tweets that included links and found that those that included adverbs and verbs had higher click-through rates than those using more nouns and adjectives. 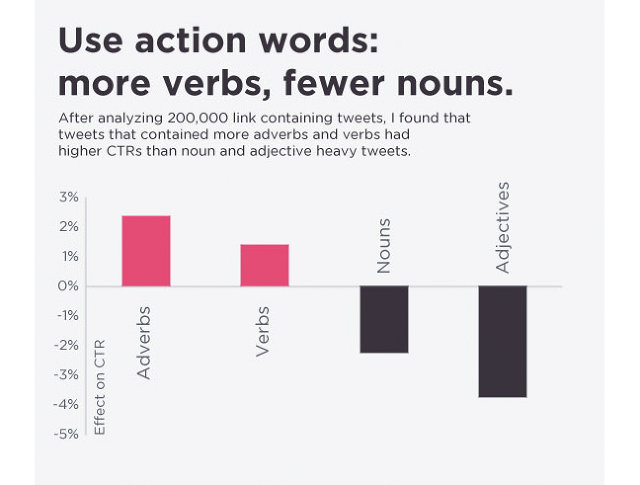 Interestingly, verbs are also more persuasive in college admission letters. Dee Leopold, Harvard Business School’s head of M.B.A. admissions said in an interview that the best recommendations for student contain lots of verbs, as these are stronger than adjectives.