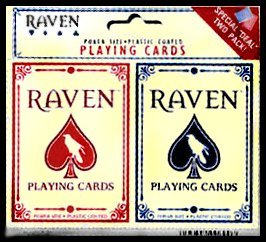 If you can't afford to buy a deck, or just want a deck to learn along with, making your own learners tarot deck is easier than you might imagine!

The process of putting it together may even help you familiarize yourself with the cards as well as help you in the beginning of learning some of their meanings and symbols.

All you'll need is two decks of playing cards and a permanent marker or pen.

They do not need to be full decks, as you are going to moderate the meanings of the cards a bit with that marker anyways. So if you have old card decks missing cards around the house, or if you pick up some old cards at a second hand or thrift store those should work fine.

Playing cards are believed to be modified from or related to the Tarot deck, and a full set of playing cards represents and matches up almost perfectly the minor arcana in the Tarot.

When we look closer at the connections between the decks, we can see the origins of the Tarot in the symbols of the playing cards: Spades represent Swords, Clubs represent Wands, Diamonds represent Coins/Pentacles, Hearts represent Cups.

So the one difference between the minor arcana of the Tarot and a deck of playing cards is that extra set of royals, the pages.

So to assemble your minor arcana, you'll need one full set of playing cards, plus an additional set of jacks from a second deck to represent the missing page cards. Your Jacks from the original deck can become knights, and the second set of Jacks pages. (If you're missing a suggested card you want at any time in this, you can always modify one of the extra cards you won't be using with that pen!).

You should have 4 complete suites of 14 cards now. So with your pen, you can write swords on your spades, wands on your clubs, coins on your diamonds, and cups on your hearts, up to you if you want to just remember, but you will need to mark the cards in some way anyways in order to indicate which way is up, since cards that are reversed have a different meaning.

So now all that needs to be done is to create your Major Arcana. This will be done using some of the cards from the remaining second deck, you will pick the 22 cards you want to represent the Major Arcana. (A Joker makes an excellent fool!)

You can use which ever cards you want for these. Face cards are prettier, but if you want to write all over them number cards will give you more area for your learners notes. For instance if you make your Priestess a 2 of cups from the other deck you'd be able to write all over white expanse of the card. The 2 would represent her placement in the numbers of the Major Arcana, the cup/chalice a traditional symbol of priestesses, or perhaps you'd prefer a different suit for your priestess, for your own symbolic reasons. Or you could pick a pretty queen to make your Priestess instead, but have less room for notes on the card.

Up to you for the major arcana, which symbols do you connect to, and what would work best for you.

Additionally, you can also use permanent marker/s or just plain pen, and mark the cards with additional information about the meaning of that card. You can just keep it to the name of the card if you like, or if you are learning, you can write crib notes on your cards. Obviously you'll be able to tell which side is up then just by which way the writing goes.

If you're always looking up the meanings still, just adding a short note of a few words on the card to remind you of it's meaning, and/or add one or two of the traditional symbols, can help speed your recall. It won't be the prettiest fanciest deck in the world, but it will be imbued with your own focus and creative energy and can be a great tarot learning tool if you're a beginner.

As an additional note, speaking of energy... If the used cards feel like they have a residual energy to them that you believe may interfere with their use, use a cleansing ritual of your choice before you start modifying them.

There are plenty of tarot card cleansing rituals you should be able to find online if you do a search, that is if you don't already have a preference for purifying/cleansing sacred items. I believe which ritual you use is less important than using one that 'feels right' to you.

Enjoy your 'new' deck and have fun learning about the Tarot! Permalink Reply by Leila Raven on May 19, 2011 at 10:49pm
My pleasure John, this was a fun article to write. I very much agree with you, making your own is an excellent learning process. If one really wanted to get into it crafting your own deck from scratch, so to speak, would be an excellent next step after this one. :) Mind you not everyone is creative mind focused, and may find that a frustrating side track, to get that detailed into the study and creation of a deck.


Thanks Raven! I feel that making your own "anything" is a great learning tool. Making Cards, Making Astrological Charts or Mandalas (without a computer program), Drawing out Symbols or words on paper, card stock, canvas, leaves or even leather is a rubbing action that in a way seems to create patterns of memory, not unlike scribes of old who, skilled in reading and writing, who were often referred to as "copyists". They copied out redundant passages and symbols page after page to create books. Their brains, their minds were filled with the memory images of that with which they worked. From mind to hand to mind.


That was just way too kewl!

I'll "me too" on what John had to say about the doing your own as being the best way to learn.  You have to think every step through :)