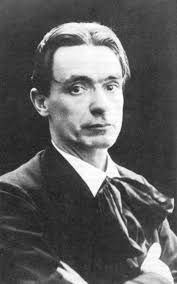 "The soul is first and foremost a being filled with longing. It is filled with sympathy and antipathy, with the world of wishes, of desire. After some time however, the spirit reveals to the soul that it comprises more than only desire. When the soul, led by the spirit, has overcome the longing, then she is not passive, then love flows from the evolved soul, in the same way that longing flows from the undeveloped soul. Desire and love, these are the two opposing forces between which the soul develops. The soul still trapped in sensuality, in outward appearance, is the soul filled with longing; the soul that that has evolved its relationship, its harmony with the spirit, is the loving soul. That is what leads the soul on its path from incarnation to incarnation, in that it evolves from being filled with longing and desire, into a loving soul whose activities become actions of love."

ModeratorPermalink Reply by John on November 4, 2022 at 4:03pm
Anthroposophy will, (from the middle of the twentieth century on), gradually experience a renewal of that which St. Paul saw in etheric clairvoyance as a mystery to come, the ‘Mystery of the Living Christ’.
There will be a new manifestation of Christ, a manifestation which must come when human capacities so develop in the natural course, that the Christ can be seen in that world in which He always was, and in which since the Mystery of Golgotha He is to be found by Initiates.
Humanity is growing into that world in order to be able to perceive from the physical plane that which could formerly only be seen from higher planes in the Mystery Schools.
The Mystery-training will nevertheless not become superfluous. It always presents things in a different way from what they are presented to the untrained soul. But that which is given in the Mystery-training will, by the transformation of the physical human body, show the Mystery of the Living Christ in a new way, as it can be seen perceptively from the physical plane, as it will be seen in the etheric, at first by a few and afterwards by more and more persons, in the course of the next three thousand years. That which St. Paul saw as the living Christ Who is to be found in the etheric world since the event of Golgotha, will be seen by an ever increasing number of people.
The manifestations of Christ will be ever higher and higher. That is the mystery of the evolution of Christ. At the time when the Mystery of Golgotha took place men were to comprehend everything from the physical plane; it was therefore necessary that they should also be able to see Christ on the physical plane, to have news of Him there, and to testify to His power on that plane. But mankind is intended to progress, it is organized for the development of higher powers, and anyone who can believe that the manifestation of Christ will be repeated in the same form which was necessary nineteen hundred years ago, knows nothing of the progress of humanity.
It took place on the physical plane because at that time the forces of man were adjusted to the physical plane. But those forces will evolve, and hence, in the course of the next three thousand years, Christ will be able to speak more and more to the more highly developed human forces.
What I have just said is a truth which has for a long time been communicated to a few individuals from within the esoteric schools, a truth which to-day must be found especially in the domain of Anthroposophy, because Anthroposophy is to be the preparatory school for that which is to come.
Humanity is now organized for liberty, for the personal recognition of that which is developing within it, and it might occur that those persons who will come forward as the first pioneers of the Christ-vision, will be shouted down as fools, that what they have to offer to mankind will not be listened to, and humanity might sink still further into materialism than it has already done and trample under foot that which could become the most wonderful manifestation for mankind. Everything that may happen in the future is to a certain extent subject to the will of humanity, so that men may also miss what is for their salvation. That is extremely important: Anthroposophy is a preparation for what is to be the new Christ-revelation."
- Rudolf Steiner 6/17/1910 Christiania
"The Mission of Folk-Souls" GA 121
(* I leave this in hopes the reader will in turn read the whole lecture, in context)

Powerful excerpt. Keep in mind that Steiner says elsewhere that the Christ works with the hierarchies of angels, yet Sometimes it seems as if the Christ is a separate, solitary Force. Also, our freedom to evolve, our global community in progress, acts in a mandorla with the etheric Christ, so my perspective tells me. We are not just here to get saved by any one Impulse in simplistic way but to evolve forward helped and guided by the loving light of the Good. Of course we need to overcome materialism and egoism/egotism along the way. Just a brief consideration.

I should mention that the Book of Hebrews (New Testament) has a good amount on the Order of Melchizedek,  and Jesus is raised to the head Priest of the Order forever. (by God).